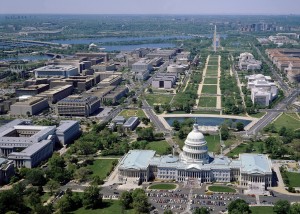 The Fly-In group visited the offices of 13 key members of the Senate Finance Committee and the House of Representatives Ways & Means Committee to discuss tax and other issues important to the geothermal heat pump (GHP) industry:

Tax Credits The current 30% income tax credit for installation of residential GHP heating and cooling systems, and the 10% investment tax credit for commercial GHP systems, were the focus of GEO’s visits to the Hill. “This is the most important issue facing our industry today,” said GEO Chairman Smith. That message rang loud and clear to the elected officials visited by GEO Board members and staff. The group explained geothermal heating and cooling technologies, and their benefits to both the economy and the environment. “Our argument that the credits could not achieve their desired positive market effect because of the Great Recession was well received,” said Smith, who remains confident that the tax credits will be extended for at least another 4 years. “Everyone in the industry has to work together,” he said. “With that strength, we can make it happen.”

Tax Extenders   Currently expired tax breaks for business called “tax extenders” were also a focus of GEO visits to The Hill. The GEO Fly-In team emphasized the importance of bonus depreciation, business-related expensing, tax benefits for energy efficient residences, and a tax break for commercial buildings (known as 179D) to the GHP industry. The Senate Finance Committee passed a package of tax extenders last summer, which includes a 2-year extension (through the end of 2016) of these four pro-visions. The U.S. House of Representatives has passed a bill with permanent extension of 179D, while the Ways & Means Committee passed a bill with permanent extension of bonus depreciation to the House floor for further consideration. “We had many positive responses to our requests for extensions of these important tax benefits for GHPs,” said GEO President Dougherty. “Final action on Senate and House legislation is not expected until the end of this year, but may be complicated by the shakeup of leadership caused by the abrupt departure of House Speaker John Boehner (R-OH).”

Definition of Renewable Energy  The Administration issued an Executive Order in the spring of 2015 that twice designates GHPs as a clean and sustainable option for future U.S. government energy purchases and consumption. “That inclusion was a direct result of meetings of GEO staff and Board members with Whitehouse staff, and is a big win for the GHP industry,” said Dougherty. Even so, he continued. “GEO wants to codify our technology into the Federal Renewable Energy Purchase Requirement in the 2005 Energy Policy Act. We are seeking a vehicle to amend the law, which will ensure more purchases of GHPs by the federal government, and set an example for the states.” The following is GEO’s suggested definition for renewable energy in federal law:

U.S. Energy Information Administration (EIA)  “With the Executive Order issued last March that redefines clean energy to include thermal energy produced by GHPs, GEO believes that data on residential and commercial GHP installations is needed now more than ever,” said Dougherty. GEO offered to develop a data collection form to collect information from all GHP manufacturers with endorsement by EIA as a trusted third party, and ensuring the confidentiality of individual data submissions.

DOE Geothermal Technologies Office (GTO)   The program office has started a Vision Study to ascertain the promise of all geothermal technologies, including GHPs. Dougherty was formally invited to join the study working group. GEO hopes the study will encourage GTO to take a renewed interest in funding of research to improve GHP technologies (article, pg. 7).

Federal Energy Management Program (FEMP) Dougherty and Ellis met with FEMP officials to discuss the agency’s future assistance to federal agencies implementing the Executive Order as it pertains to installation and measurement of GHPs. “GEO offered its assistance on any technical issues that arise,” said Dougherty.