When ASHRAE contracted a major renovation of their two-story, 31,000 sq. ft. building in 2008, they established a “living lab” to offer the chance to evaluate commercial building energy and sustainability performance. In addition to improvements to its envelope, floor plan and sustainability features such as lighting, the building uses three separate heating, ventilation and air-conditioning (HVAC) systems:

The GEO research team studied the relative performance of the GHP and VRF systems, determining energy consumption of each, and heating and cooling required by the building. “There’s no question about it—GHPs trump VRF systems for efficiency and cost savings,” said GEO President and CEO Doug Dougherty. “Our study of heating and cooling performance at the ASHRAE Building proves that over a two-year period—when all variables were accounted for—energy use by the geothermal system averaged 44% less than the VRF system.”

To facilitate efficiency studies like that performed by GEO, the ASHRAE Building renovation included an array of 1,600 sensors that monitor heating, ventilation and air-conditioning operations and conditions in each building zone.

The team also collected data for metered energy used by each system. For the GHP system, that included power for all 14 heat pumps, as well as the ground loop water circulation pumps. For the VRF system, power is metered and recorded only for the two heat-recovery units and the 22 FCUs connected to them. Power for the three dedicated split systems is metered through a different panel that also includes power used for computer servers and other equipment. All such differences were taken into account for comparison. 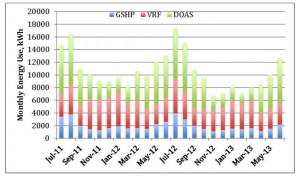 Total monthly energy use by each HVAC system

“Though the energy consumed by each system is affected by several factors—including floor space; heating and cooling loads; control strategies; and operating conditions/efficiencies—the efficiency implications of each system are clear,” said Spitler. “Raw data show that the VRF system used twice as much energy as the geothermal system during the two-year study period.” The areas served by the GHP and VRF systems have different heating and cooling loads, so the research team estimated heating and cooling loads for each as a combination of measured heat gains from lighting, plug loads, the DOAS , estimated occupant loads, and simulation-computed envelope loads.

The graph at left shows that when differences in floor space were normalized, energy use (kWh/sq. ft.) by the GHP system was an average 44% less than the VRF system. “During the two-year study period, the GHP system used 29% less energy in the summer and 63% less energy in the winter/shoulder seasons than the VRF system, while maintaining similar zone temperatures,” said Spitler.

“Final Report, Performance of the HVAC Systems at the ASHRAE Headquarters Building” is available at the GEO website, here. Two peer-reviewed articles by Spitler et al. describing the project and its results were published this year in the ASHRAE Journal (September and December2014 issues). The articles can be accessed online at the ASHRAE website, here, and here. GEO will offer a free webinar about the research in early February 2015.

You can download a PDF of GEO’s Webinar on the report here, or view a recording of the event here.

* ASHRAE provided data for this study, but the organization does not endorse, recommend or certify any equipment or service used at ASHRAE International Headquarters.