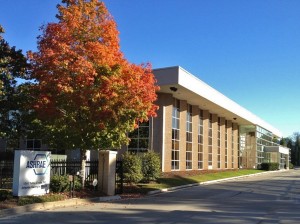 When ASHRAE contracted a major renovation of their two-story, 31,000 sq. ft. building in 2008, they established a “living lab” to offer the chance to evaluate commercial building energy and sustainability performance. In addition to improvements to its envelope, floor plan and sustainability features such as lighting, the building uses three separate heating, ventilation and air-conditioning (HVAC) systems:

The GEO research team studied the relative performance of the GHP and VRF systems, determining energy consumption of each, and heating and cooling required by the building. “There’s no question about it—GHPs trump VRF systems for efficiency and cost savings,” said GEO President and CEO Doug Dougherty. “Our study of heating and cooling performance at the ASHRAE Building proves that over a two-year period—when all variables were accounted for—energy use by the geothermal system averaged 44% less than the VRF system.”