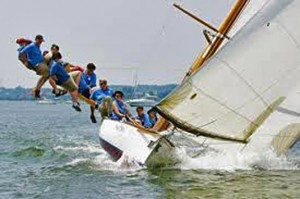 Will future winds put the geoexchange industry in irons, running or somewhere in between? You can’t come to the Chesapeake region without thinking about sailing. And if you have ever spent a day sailing the Chesapeake Bay, you know that the direction the wind blows can make or break your day.

At the International Ground Source Heat Pump Association (IGSHPA) in Baltimore during mid-October, attendees spent their time contemplating how future winds will influence the geoexchange industry. The predictions of meteoric growth from past events were gone, and in their place were frank presentations and discussions on the policy, financial and technical issues that will shape the future of geoexchange. IGSHPA 2014 had the distinct feel of being a gathering of people serious about the industry and willing to do the hard work necessary to make geoexchange a mainstream technology.

Geoexchange is often cited as the most efficient space heating and cooling technology available, but it has achieved only a modest share of the U.S. heating, ventilation and air conditioning (HVAC) market. Six years after federal tax incentives for geothermal heat pumps (GHPs) were put in place, the question remains, “What will it take for geoexchange to become a mainstream HVAC solution?” IGSHPA 2014 offered insight into four issues that will shape the industry’s future:

Sunset on Tax Incentives GHP installations benefit from tax credits and special treatment with respect to depreciation. The federal government gives residential buyers of GHP systems a 30% tax credit, and commercial system owners a 10% tax credit. Under the federal Modified Accelerated Cost-Recovery System (MACRS), GHPs’ status as a renewable energy technology allows commercial system owners to depreciate system costs over five years instead of the 39 years that normally apply to HVAC equipment. This accelerated depreciation is a big benefit for entities with tax liability, and is a key component in establishing tax-equity investment scenarios.

The tax credits and MACRS for GHPs are set to expire at the end of 2016, and many predict that this will lead to a sudden fall-off in demand. Much discussion at IGSHPA revolved around how best to engage legislators and policy makers on the future of these tax incentives. There are a number of challenges to getting these incentives extended. The next few months will be key in determining their fate.

The Geothermal Exchange Organization (GEO) is tasked with legislative advocacy and is a good resource for anyone interested in what is happening on the public policy front.

Innovations in Geo System Financing The upfront (or first) costs of geoexchange systems are often cited as a barrier to greater market growth. The geoexchange industry has long promoted the idea of third parties financing and owning system ground loops as a way to address this issue. Two presentations at IGSHPA 2014 showed how third-party owned ground loops can become a reality.

First, Western Farmers Electric Cooperative (WFEC) presented their pilot program designed to convert customers from traditional HVAC systems to geoexchange. In WFEC’s program, the utility owns the ground loop and the homeowner pays for the loop via a tariff that is added to their electric bill. Based on the pilot program results, WFEC sees big potential for geoexchange to cut peak demand and help level summer and winter power demands. They are now working on a plan to get GHPs into as many as 13,000 homes.

In the second case, GeoTility presented their geothermal utility model for funding geoexchange projects. Under this business model, GeoTility funds the installation of the ground loop and then is paid back through the sale of thermal energy to the system users. These two examples offer hope that financing innovations for geoexchange installs will soon be driving the industry.

EPA’s Clean Power Plan and Geo A second area of public policy that received attention at IGSHPA 2014 was the Environmental Protection Agency’s (EPA) Clean Power Plan. Under the Clean Air Act’s Section 111(d), EPA has announced a plan to reduce greenhouse gas emissions from existing coal-fired electric power plants by requiring action at the state level. Among people in the geoexchange industry, there is optimism that the EPA’s plan will help drive demand for GHPs.

This works against the strategy of reduced operations of coal-fired plants. There is concern that this odd twist will leave GHPs on the outside looking in when states draw up their plans to comply with the Clean Power Plan. People active with IGSHPA, GEO and the American Society of Heating Refrigeration and Air-conditioning Engineers (ASHRAE) are paying close attention to the progress of 111(d) and will be offering input to EPA on how geoexchange fits into the Clean Power Plan (see article, page 1).

Evolution of Geoexchange Design On the technical front, IGSHPA 2014 highlighted how the design community is growing in know-how and capacity to support the design of geoexchange systems. While stories of systems exhibiting operational problems are still too common, discussions among the many experienced designers at the event show that lessons are being learned and designs are better.

One encouraging sign is the increased use of hybrid geoexchange in system designs. Hybrid systems incorporate traditional elements like cooling towers along with geothermal heat exchangers (GHEs) to manage the thermal load imbalance that is typical in most commercial projects in the United States. In their best form, hybrid systems represent a clear grasp of how a GHE works, and provide sys-tem owners with a more robust and sustainable solution than a geothermal-only system. Hybrid designs require smaller GHEs, leading to lower first-costs of geothermal system installations. In addition, when optimally operated, they can actually reduce life-cycle energy consumption compared to non-hybrid systems by maintaining favorable entering water temperatures. With more innovative and robust design strategies, the geoexchange design community will make inroads into more projects by expanding the places where geoexchange works, increasing the robustness of system operation and optimizing project owners’ returns on investment.

All in all, the future for geoexchange remains uncertain. Whether the industry finds itself facing headwinds or with the wind at its back in coming years will depend on a number of factors. Future tax policy, third party financing, the EPA Clean Power Plan and the development of design expertise will all play a role. Time will tell if geoexchange remains a niche solution or breaks into the mainstream. And, for those who are interested, IGSHPA 2014 was a good place to get a glimpse at the industry’s telltales.