“Geothermal Loops Back Around”

Geothermal Exchange Organization (GEO) President and CEO Doug Dougherty joined a “roster of experts” for an article, “Geothermal Loops Back Around,” about the geothermal heat pump (GHP) business in a recent issue of Contracting Business. Their verdict: 2014 was a very good year for growth, despite a significant but temporary decline caused by the extreme cold weather early last year. And they say we can expect the same strong performance during 2015.

“Once the weather broke, we had a resurgence of adoption of the technology in homes and we made up, and then some, all of what we lost in the first quarter,” Dougherty said. “We anticipate a very good 2015 in terms of residential shipments.” Dougherty says the number of commercial installations is also increasing. 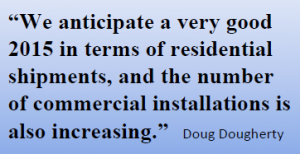 The biggest drivers of GHPs’ increased market share are changes in public policy and the construction market. “We’re beginning to see the results of some of the public policy changes we’ve been making across the country in which utilities have a better appreciation for our technology,” Dougherty said. “Coming out of the recession, there are more homes being built now than in the last three years.”

On the federal side, he said that GEO is optimistic that the Shaheen-Portman bill will be reintroduced in the Senate, and that it will include the organization’s definition of clean energy—which includes GHPs. According to the article, “Dougherty says passage of the bill would help the industry in two ways. First, the federal government would recognize geothermal heat pumps as being a source for renewable energy, leading federal government buildings to take a new look at the technology. Second, GEO would then be able to go to individual states and use the federal position as leverage (to change their view of renewable energy to include GHPs).”

GEO has also been working to amend legislation at the state level to recognize geothermal energy as clean and renewable. “The group has been successful in Maryland, New Hampshire, Massachusetts and Wisconsin, which now recognize geothermal heat pumps as being renewable. Efforts are underway in New York, Illinois, California, Michigan and New Mexico.”

“Right now we’re starting to see sort of a ripple effect throughout the country that Renewable Energy Portfolio Standards should include thermal energy avoided by solar thermal and geothermal,” Dougherty said. “Once you get it done in one state or two states or three states it becomes easier to do it across the country. We predict by the end of this year, we will have an additional three or four states.”

With a number of geothermal experts interviewed for the article, GEO Board Member and Chairman Emeritus Tom Huntington (WaterFurnace) is also bullish for the future of GHPs. “We believe there remains a pent up demand that will result in increased geothermal sales. We’ve seen a correlation between consumer confidence and a homeowner’s willingness to make large investments in their home. It bodes well that confidence levels have been on the rise. We expect to see a strong 2015,” he said. Read the entire article here.