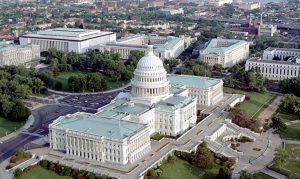 Sept. 26 (Springfield, IL)   On Sept. 21/22, the Geothermal Exchange Organization (GEO) led a coalition of national associations during a “Fly-In” to Washington DC.

24 representatives from these associations were divided into five teams each led by a GEO lobbyist.

During a coalition organizing and scheduling meeting on the morning of Sept. 21, the coalition was greeted by Rep. Tom Reed (R-NY), chief sponsor of H.R. 5167. He thanked the group for supporting his bill, saying he was confident the bipartisan legislation would “cross finish line after the elections.”

During the two-day Fly-In, coalition members visited 56 congressional offices. “The message was the same everywhere we went,” said GEO President and CEO Doug Dougherty. “Give the geothermal heat pump industry exactly what the solar industry got in last December’s omnibus bill, by extending our residential and commercial tax credits, thus leveling the playing field for applications currently included under Sections 25D and 48 of the tax code.”

The coalition also wants tax credit qualification language changed from after geothermal equipment is “placed in service” to when construction/installation is “commenced.”

There appears to be agreement that a continuing resolution will be passed to keep the government functioning until Dec. 9 of this year. This will open the door to more comprehensive spending legislation when Congress reconvenes in mid-November for a three-week “lame duck” session after this year’s elections.

“It’s within this narrow window that another omnibus or series of smaller bills will be decided upon,” Dougherty explained. “The goal of our coalition is to make sure that the geothermal heat pump tax credits for both residential and commercial installations are included in one of those bills.”

“We’ve built a pretty impressive coalition that made its presence felt in Congress during our Fly-In,” said Dougherty. “But we can’t let up.  We must build grassroots support during the October recess, then return to Washington for another Fly-In after the elections. Together we can make this happen.” (GEO)

H.R. 5167 Provisions for Our Industry in a Nutshell

H.R. 5167 — the Technologies for Energy Security Act — is a bipartisan bill introduced in the U.S. House of Representatives by Rep. Tom Reed (NY). The legislation would extend the 30% income tax credit found in Internal Revenue Code (IRC) Section 25D for residential installations of geothermal heat pumps (GHPs), and the 10% business investment tax credit found in IRC Section 48 for commercial installations of GHPs.