On Nov. 16, the Geothermal Exchange Organization (GEO) Board of Directors voted unanimously to present The Southern Company / Gulf Power with its Utility Excellence Award. It recognizes “outstanding promotion of geothermal heat pumps by an Electric Service Provider to its customers as an efficient, renewable energy end-use alternative.”

Stan ConnallyWith a service territory covering ~430,000 customers in the northwest Florida Panhandle, Gulf Power Co. is an integral part of The Southern Company. With subsidiaries Alabama Power, Mississippi Power and Georgia Power, The Southern Comp-any is one of the nation’s largest electricity providers, serving over four million customers. Click here for more information.

Southern Company / Gulf Power was a founding member of the Geothermal Heat Pump Consortium (GHPC – now the Geothermal Exchange Organization – GEO), and has been a Utility Member for nearly 20 years.

According to the Gulf Power website and the U.S. Department of Energy, geothermal technology is the most energy-efficient and environmentally clean space-conditioning system available today. In addition, geothermal systems have the lowest life-cycle cost of any modern heating, ventilation and air conditioning (HVAC) system.

Gulf Power and the Southern Company have been long-term and consistent supporters of geothermal heat pump installations, recognizing their many benefits for consumers— especially energy cost savings. “Promoting geothermal heat pumps is one of our demand-side management programs,” said Gulf Power President and CEO Stan Connally. “Our goal as energy experts is to help customers across Gulf Power and the Southern Company make informed decisions and choices when it to comes to saving money on their energy bills. Energy efficiency has been and is becoming even more important to our customers. Geothermal heat pumps use electricity for heating and cooling more efficiently than any other option.” 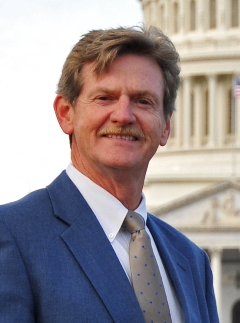 According to Swilley, “Through its promotions and support of GHPs over the past 18 years, Gulf Power Co. has successfully promoted the installation of nearly 3,000 residential geothermal heat pump systems, and almost 9,000 tons of capacity in commercial buildings. “Commercial geothermal installations include schools, office buildings, restaurants, hotels, condominiums, and county buildings—including a prison,” he said. “And Gulf Power has geothermal HVAC at four of its own office buildings, with another soon to begin construction.”

High-profile Installations include a McDonald’s restaurant in downtown Pensacola; The Grand Marlin Seafood Restaurant on Pensacola Beach (a seaside restaurant destroyed by Hurricane Ivan, then rebuilt with GHPs), and the Springhill Suites Hotel (Marriott)—which won a 2008 First Place International Technology Award from the American Society of Heating, Refrigeration and Air-Conditioning Engineers (ASHRAE).

The hotel uses a hybrid geothermal system, with a 150-ton closed-loop evaporative fluid cooler. Set up in parallel with the underground loop field, the cooler offers considerable heat rejection control and redundancy. Primary domestic water heaters are three each, 5-hp water-to-water GHPs. Pool and spa heating is pro-vided by GHPs. Over 300 tons of room unitary, ducted GHPs are used in guest suites and to serve all other conditioned areas of the hotel. Overall annual energy intensity for the geothermal hotel is 79 kBTU/sq. ft., compared to a similar hotel in the region that operates at an annual energy intensity of 139 kBTU/sq. ft. with conventional HVAC equipment.

Besides awards for efficiency and innovation, there are more important reasons that Gulf Power has chosen to promote geothermal heating and air conditioning systems.

“As with other energy efficiency programs, we promote GHPs to encourage efficient and wise use of energy,” he explained. “Geothermal heat pump systems in both residential and commercial applications reduce and manage generation peak demand, while improving customer satisfaction and helping them save money.” At the same time, GHPs help the utility shave its peak power demands on hot days when air conditioning demand is high.

To track the efficiency and cost savings of GHP systems, Gulf Power is now monitoring identical McDonald’s restaurants in Pensacola, FL—one with a geothermal system, and one without. “By next year, we’ll have some real good comparison data that will show the savings in energy that can be achieved with geothermal energy,” Swilley said.

Gulf Power currently promotes installation of new, complete closed loop GHP systems by providing a $500/ton (12,000 BTU of cooling) incentive for single-family or multi-family dwellings, as well as commercial geothermal projects. To qualify for the incentive, the GHP must meet a minimum efficiency standard, and company specific installation guidelines. For more details, call (877) 655-4001, or visit the Gulf Power website here.