Along with a keynote address by Geothermal Exchange Organization (GEO) Board Chairman Steve Smith (Enertech), over a third of technical and other presentations at the IGHSPA 2015 Conference & Expo were provided by members of the GEO. These included the following sessions presented by representatives of the GEO Board of Directors and researchers working directly with the association: 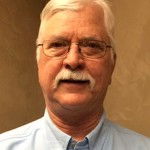 GEO Board Member Phil Schoen (Geo-Enterprises – Catoosa, OK)
Geo Enterprises, Inc. , one of the leading experts in geothermal heat pump technologies, is the prime contractor for the geothermal district system at the new, 100% energy-neutral Whisper Valley residen-tial subdivision in Austin, TX. The development will ultimately include 7,500 residential units and 2 million sq. ft. of office and retail space. Every building will be outfitted with geothemal heating ad cooling plus solar energy systems. GEO Enterprises is working with Taurus Development and its several contractors, including wholly owned subsidiary Ecosmart Solutions, to offer a complete package that allows homeowners to achieve zero net energy standards while also profiting as they stop worrying over energy crises as their homes increase in value. 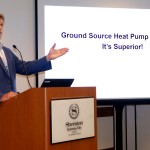 “Stack up the best heating and cooling system options,” Swilley said, “and GSHPs are still the most efficient choice.” Today’s air-conditioning and heating equipment ratings make consumers think they are buying an efficient system when they aren’t. What they don’t know is that the typical seasonal ratings can really overstate an HVAC system’s efficiency when the unit runs the most—when it’s hot or cold outdoors. Swilley com- pared air source vs. ground efficiencies, based on manufacturer performance data that show the GSHP efficiency advantage.

ASHRAE Headquarters Building: GHP vs. VRF Systems
Jeffrey D. Spitler, PhD, PE  (Study funded by GEO)
When the American Society for Heating, Refrigeration and Air-conditioning Engineers (ASHRAE) International Headquarters Building in Atlanta, GA was renovated in 2008, three state-of-the-art heating and cooling systems—a geothermal heat pump (GHP) system, a variable refrigerant flow (VRF) system and a dedicated outdoor air system (DOAS)—were installed. The building was instrumented with over 1,000 sensors, creating a “living laboratory” that was used by Dr. Spitler and his research team to study the performance of the building and its systems. Their results showed a more than 40% efficiency advantage of the GHP system over the VRF system.