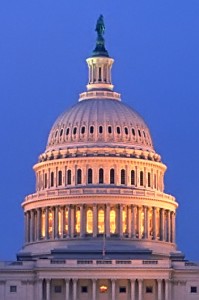 Dec. 18 – The U.S. House of Representatives and U.S. Senate passed a $1.1 trillion Omnibus bill to fund the government and a companion bill to provide $650 billion in tax relief over 10 years.

According to Geothermal Exchange Organization President Doug Dougherty, “We scored a big win with the tax bill, which includes four ‘tax extenders’ which are particularly beneficial to the geothermal heat pump (GHP) industry.” They are:

“Having worked hard for these extenders over the past couple of years, GEO is very happy about their passage,” said Dougherty. “But we were extremely disappointed that despite our best efforts, GHPs were passed over for extensions of installation tax credits that were given to wind and solar technologies in the Omnibus bill.”

GHPs Passed Over in Error

The Omnibus bill extends the Wind Production Tax Credit (PTC), the 30% solar Investment Tax Credit for commercial installations (ITC – including 5-year depreciation), and the 30% solar income tax credit for residential applications. The wind and the solar extensions include phase-outs through 2022. The GHP industry was assured that it would be included in the bill, but at the last minute, GHPs and other renewable energy technologies with tax credits expiring at the end of 2016 were left out.

“During 11th hour, closed-door negotiations over lifting the U.S. ban on crude oil exports—which were impossible to anticipate or influence—the wind PTC and solar tax credits were hurriedly inserted into the final Omnibus bill,” said Dougherty. “In their haste to release the bill, staffers inadvertently left out language to extend tax credit provisions for other eligible renewable technologies. That error excluded the PTC for geothermal power, and the ITC and income tax credits for GHPs, fuel cells, small wind, microturbines, and combined heat and power.”

Just like those industries, GHP advocates were blindsided by the 11th-hour deal. “Despite hundreds of last-minute calls from our industry supporters, we failed by only one vote to gain a last-ditch amendment that would have included tax credits for GHPs and the other technologies in the legislation,” said Dougherty.

It’s important to remember that GHPs’ commercial and residential tax credits remain in force until Dec. 31, 2016. And with the industry’s new allies in the geothermal power, fuel cell, small wind, microturbine, and combined heat and power industries, GEO can make a powerful argument for both fairness and equity.

“The immediate backlash whipped up by the GHP and other industries left out of the tax credit extensions made key congressional staff well aware of the problem,” said Dougherty. “And we have assurances from them that the inequity will be addressed during the first few months of 2016.”

House Ways and Means Chairman Kevin Brady (R-Texas) publicly acknowledged concern that the ITC and income tax credit extensions for solar did not include other eligible technologies, saying, “We’d be glad to revisit that.” And House Democratic Leader Nancy Pelosi (D-CA) said she has been promised action in early 2016: “We still have some unfinished business there, because the bill, through a drafting error, did not include fuel cells, geothermal, and some other renewables that are part of that tax credit. And we have a commitment that that will happen in an early revue bill after the first of the year,” she told reporters at a press conference.

The Way Forward for GHPs

“At first blush, GHP exclusion from tax credit extensions in the Omnibus bill looked bad for the industry,” Dougherty said. “But on further review, we now believe that the situation has created an easier path for us to get commercial and residential tax credits for GHPs extended to 2022. During the first quarter of the year, our goal is to include GHPs in an amendment that will give us parity with solar industry tax credit extensions. That is the opportunity that we are now focused on going forward.”

GEO will urge Congress to extend PTC, ITC and income tax credits for ALL eligible technologies. The message? “Congress should not be in the business of picking winners and losers among renewable energy options. It must remain technology neutral and market sensitive. This is especially important as the nation reaches for lofty environmental and economic goals,” Dougherty said.

“With the solar ITC and income tax credits already extended by the Omnibus bill, we know exactly the terms we must fight for, with the solar tax credit extensions as a prime example. And we now have a timeline and defined way forward, with new and renewed support in Congress.”

“GEO is confident that with the help of our industry supporters, we can succeed. We thank everyone who heeded our call to action this week, and ask that you be ready to act again in the next few months,” Dougherty concluded. “Your voice will be crucial to our arguments to give our tax credits a chance to expand GHP market share in an improving economy. All hands on deck!” (GEO)