The project assessed the potential of geothermal heat pump (GHP) systems to reduce energy use and carbon emissions in terms of temperature and geologic regimes across the state. The study focused on GHPs helping California meets sustainable energy goals under the state Renewable Portfolio Standard (RPS) for electric utilities, plus its greenhouse gas emission reduction goals under Assembly Bill 32.

According to a policy brief (available here) for the 103-page study report (here), “California will need to employ all viable means of reducing greenhouse gas emissions to achieve the 80% reduction from 1990 levels, as outlined in Executive Order S-3-05 (2005)…. Deploying a significant number of GHP systems across California, particularly in climate zones that are dominated by heating loads, could help significantly reduce greenhouse gas emissions, as well as other (air pollution) emissions.”

The CGEC team designed a GHP system for a standard model home in each of the 16 California climate zones, then carried out a comparison between the total energy consumption of a conventional HVAC versus that of a GHP system. The results were used to compare estimated energy use, carbon dioxide, nitrogen oxides, sulfur dioxides, and displacement of natural gas by climate zone. 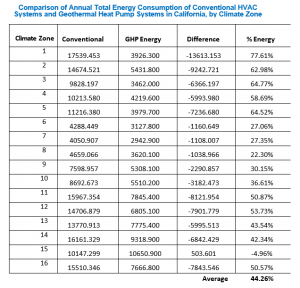 Project results demonstrated that GHPs could significantly decrease electricity consumption, while reducing costs of heating and cooling homes and commercial buildings . “Results showed that significant reductions in energy and natural gas demand and emissions would occur with GHPs in 15 of the 16 climate zones. The energy use savings and emissions reductions (between about 20 and 70%) indicated that deploying these highly efficient systems could dramatically reduce energy consumption and atmospheric emissions statewide.”

In summary, the CGEC study results confirmed that: